Bethlehem: The Quiet Entry of a King 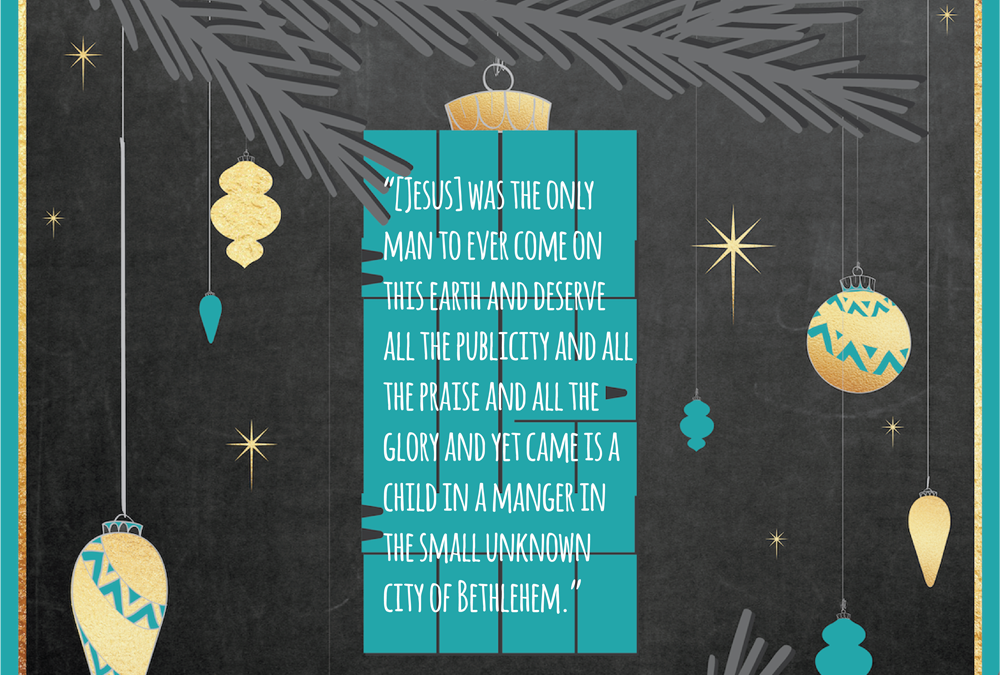 But you, O Bethlehem Ephrathah, who are too little to be among the clans of Judah, from you shall come forth for me one who is to be ruler in Israel, whose coming forth is from of old, from ancient days.  – Micah 5:2

We live in an interesting world full of celebrities and hype and publicity. It’s easy to tell when somebody is important or should be paid attention to. They typically have a large following, there’s cameras and media all around them and they typically do a good job of leveraging their own presence for profit.

I remember first hearing about YouTube sensations and teenagers gaining a following because of their YouTube channels. I was floored. The whole concept did not make a ton of sense to me. That might be showing my age. However, in a day where our Instagram profiles and our Snapchat stories only present the image we want them to, we are able to build our own publicity.

Truly, there’s a market out there for how we hype ourselves up and how we present ourselves to the world in an attempt to make ourselves sometimes look larger then reality. There are whole degree programs and career paths now based on the idea of branding yourself and leveraging your brand for future gain. This is not a blog to attack these opportunities but to explore how stark of a difference that reality is compared to the Christ figure in Bethlehem in a stable.


The awaiting Jewish nation were not that different from today’s hyped up society. They were waiting on their conquering king, their true messiah who would come in and overthrow the Roman government bringing Israel back to its proper place of dominance. They were waiting on a savior on a white horse with a big sword and a giant personality. What they received was so much better but not at all what they were waiting on.

Micah 5:1-2 should’ve been their clue. In verse two it says that even from little Bethlehem who was too little to be even named among clans of Judah, from that city would come forth the ruler of Israel. They should have been looking to Bethlehem. Interestingly enough, it is our Savior, the Christ child, who would not come to the palace in Jerusalem or the magnanimous city of Nazareth or even the most luxurious house in Bethlehem.

He would be rejected by the innkeeper, subverted to a stable in a manger fit for animals and from that humble beginning would come the Savior of the world. The stark contrast between the heroes of today marketing and publicizing themselves trumpeting themselves to all who will listen compared to the Messiah of the world who came quietly in a small humble place should catch our attention.


Bethlehem, a manger, surrounded not by kings and princes but by animals, this is where our Savior chose to come. Prophesied in Micah, Christ was and is always the picture of humility. My own wicked heart so longs for the fame and the glory. I would’ve never chosen, as the Savior of the world, to come to those circumstances but would have immediately picked somewhere I would be celebrated and seen.

Not our savior. He’s the savior of Philippians 2. The suffering servant of Isaiah 53. The Savior who would give up everything he deserved to save a world who only deserved wrath. As we get closer to Christmas day my hope is you will take a longer look at the circumstances in which Jesus found himself on Christmas morning. He was the only man to ever come on this earth and deserve all the publicity and all the praise and all the glory and yet came is a child in a manger in the small unknown city of Bethlehem.

As a believer in Christ as the Messiah this should shake me. If the Savior of the world didn’t trumpet his own glorious entrance into this world how much less does my own personality and presence matter?

If you’re wanting more, Spencer shares some behind the scenes thoughts on Bethlehem.