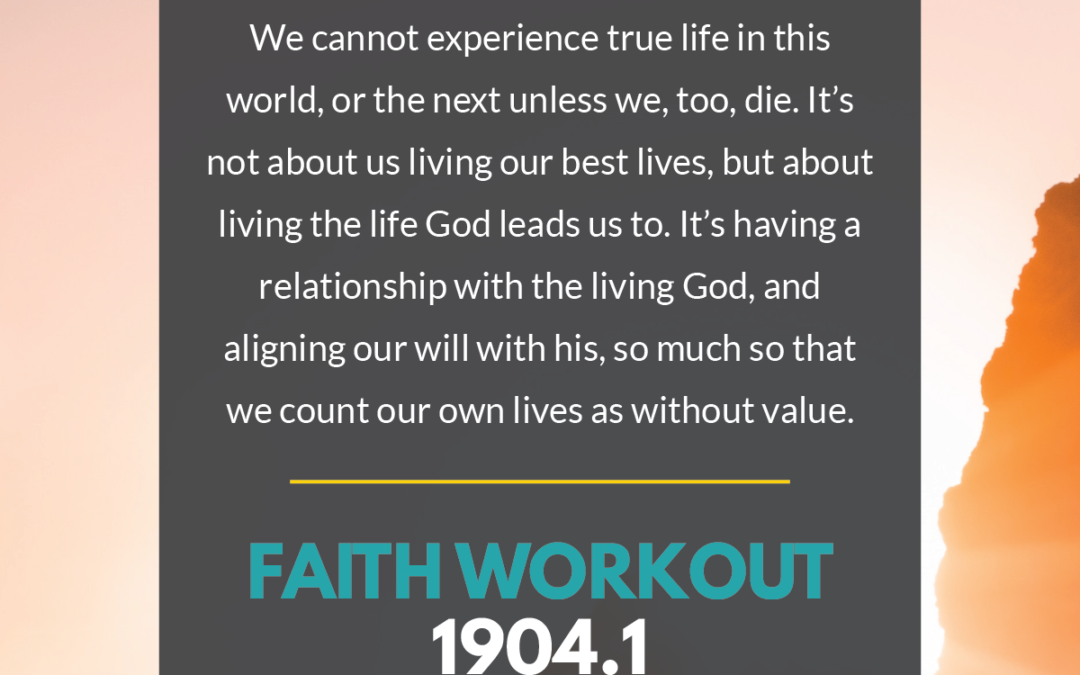 Suffering on purpose is something that any athlete who does Crossfit understands. We deliberately do workouts that will stretch, tear and shape us knowing that the value is in the after affects and improvements to our strength and health. We even do so while doing the Passion WOD this weekend. When we go to the whiteboard and see a horrible looking workout we can feel awful at the anticipation.

Jesus of course knew that his suffering would be fatal. As he reflected on what was to come in Gethsemane the Bible tells us he sweated ‘great drops of blood’. The magnitude of what he was facing almost overwhelmed him, and yet his prayer in response ‘Your will be done Father, not mine’.

Jesus was about to be flogged to the point where many people would often die from the intensity of the beating. Barely alive, Jesus would have a crown made of thorns rammed on his head, he would be mocked, and he would be assaulted. When people were done, he carried the instrument of his own death, a cross weighing 40 kg/90 lb or more, on the bloody pulp of his back and shoulders.

In the end, he would be suspended from that cross, and attached to it by nails driven through his hands and feet, his body weight slowly asphyxiating him, and the only way to survive was to push against those nails that pierced him. The torture endured for six terrible hours.

But more than the physical agony, the anguish of a carrying the weight of every sin ever committed on his shoulders, would be the greatest.

Just how bad do you feel if you get caught in some minor indiscretion by someone you love? Now imagine, here Jesus was, having done nothing wrong himself yet he was bearing the guilt and pain of every murder, rape, assault, theft, abuse and lie ever committed or would be committed. In these final hours, the eternal communion with his father was wrenched from him, not due to his own crimes, but due to ours.

Yet, Jesus did this willingly. He laid down his life and suffered all of that for you. When he died he cried out, “It is finished.” His mission on earth was complete- To pay the penalty we deserve to pay, to create a pathway for us to escape from death to life.

But that’s not the end of the story, now, is it? Three days later he would be the first to walk that path as he rose again and reclaimed his glory. Now at God’s side he is ready to mediate for us.

So how should we respond? Primarily by accepting Jesus as our saviour, by trusting that he is the way to eternal life, and that only through his sacrifice can our sins be removed.

As Christians, the temptation is to follow that commitment with work- suffer by not doing the things we’d like to, and doing things we don’t enjoy; by trying to live the best life we can. After all, we prove every workout that we know how to do this, but the Bible is clear: We can never work hard enough to achieve the standard required for salvation: holiness. Our starting point is instead to follow Jesus’ example, we need to die. Not a physical death but a spiritual, mental, emotional one.

In Romans 6:5-11 we read:
‘For he who has died has been freed from sin. Now if we died with Christ, we believe that we shall also live with Him, knowing that Christ, having been raised from the dead, dies no more. Death no longer has dominion over Him. For the death that He died, He died to sin once for all; but the life that He lives, He lives to God. Likewise you also, reckon yourselves to be dead indeed to sin, but alive to God in Christ Jesus our Lord’.

We cannot experience true life in this world, or the next unless we, too, die. It’s not about us living our best lives, but about living the life God leads us to. It’s having a relationship with the living God, and aligning our will with his, so much so that we count our own lives as without value. Then our suffering is not work for our benefit, but is a willing sacrifice to the one who gave everything for us. The life that we then experience is like nothing that money can buy. It can’t be lost, stolen or broken by circumstances, and with it we have the peace and joy that nothing in this world can replicate.

Jesus was willing to suffer and die for you. Are you willing to do the same and live for him?