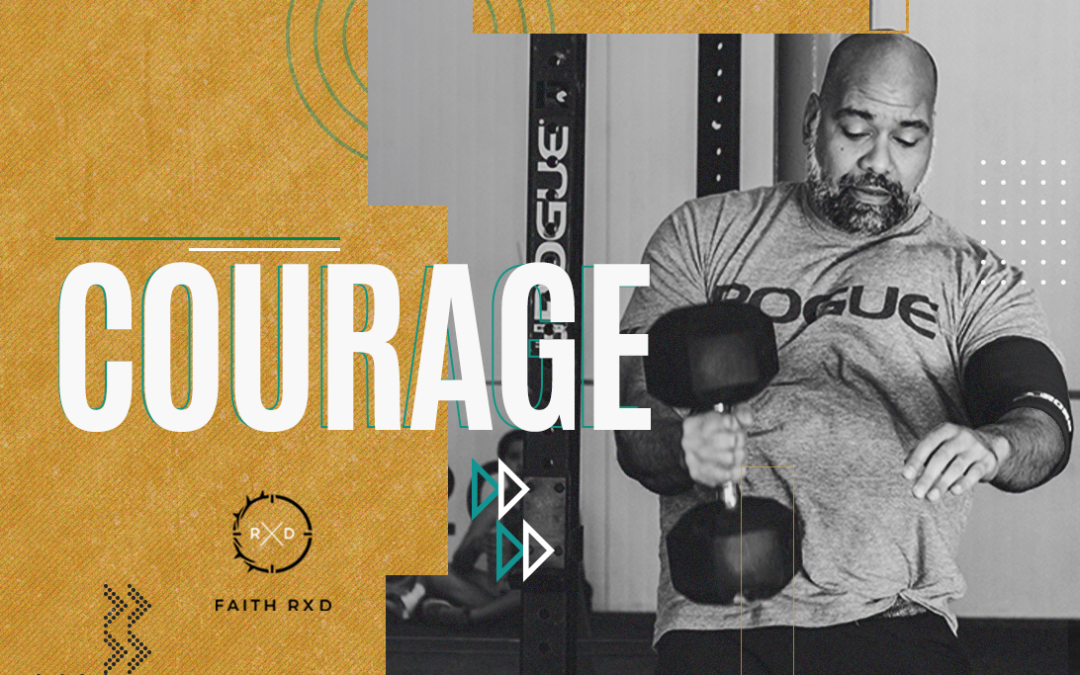 Today we’re going to look at courage again, also diving in to another Old Testament hero. For our Fitness Workout, we’re going to do some prep for the Hero WOD, Murph. A workout fitness enthusiasts do around the world in May to honor men and women who have given their lives protecting others.

We’re going to do Cindy. It’s only three movements, and  we’re going to mix it up. Most of the time pull-ups are done kipping, but today we’re going to do them strict. Many people like to skip putting in the hard work of doing strict pull-ups and get to kipping as fast as they can. How often do we skip the tedious work in life and choose what’s more convenient or has the “better” reward like more reps or a faster time?

Earlier this month, in our first FAITH + FITNESS Workout, Greg Amundson discussed the courage shown by David and Jonathan. He pointed out how often the focus is placed on David. We tend to focus our attention on the presumed hero of the story, the young shepherd David, rather than focusing our attention on God. David placed his trust and hope in God first, and from there, he was able to express courage. It wasn’t on David’s own strength that he was able to be courageous—it was on God’s. The underlying theme was courage as an act of surrender. Today, I want to look at courage as an act of obedience through another Old Testament example, Abram (later known as Abraham).

I know the word, “Obedience,” instantly made most of you bristle. It tends to put me on edge, too. In the US, we thrive on independence, forging our own path, and being the master of our fate. In CrossFit, this is heightened even more with attitudes of “Hard Work Pays Off,” “Put in the work,” “Pay the Man,” and doing everything we can to get better. Don’t get me wrong: There is certainly some truth in all these things, and we know from experience there is value in discipline. However, if we’re honest with ourselves, there’s a big ego driver of, “LET. ME. CONTROL. MY. OUTCOMES.”

Oxford defines courage as, “The ability to do something that frightens one.” Surrendering, letting go of control, and listening to someone else when you don’t know what the outcome will be terrifies most people. In the passage of Genesis that we read, God says to Abram, “Go from your country and your kindred and your father’s house to the land that I will show you. And I will make you a great nation…” (12:1-2). However, you’ll notice as we read, God never told Abram exactly where he was going or how he would fulfill this promise. How does Abram respond? The Bible says, “So Abram went, as the Lord had told him” (12:4a).

Not only did Abram go, he packed up all he owned, gathered his family, and left his entire world behind. We don’t get a ton of details about how he felt about it, but you can feel his conviction to listen and obey. What’s even more amazing is that Abram probably was not a God-follower before this point. At this time, there is no Israel or God’s chosen people. His family probably thought he was crazy.

You might have noticed something that ties both surrender and obedience together—it’s the word, “Choice.” You have to actively “choose” to surrender, and you have to actively “choose” to obey. In order for us to know how to choose the things to surrender, and choose the things to obey, we need to know what is godly and righteous. We often look for audible words similar to how God spoke to Abram, but he doesn’t always speak that way to us. So we do the next best thing, by getting into God’s Word, the Bible. By choosing to spend time with Him. By choosing to open our Bibles and being active readers. We have to remember, at this point in history, when Abram is making his choice, the Bible doesn’t even exist.

In Genesis 12:7, Abram has left and begun his travels. God appears to Abram in one of the places where he has set up camp. In that place, God reveals more of his promise. In an act of worship and praise, Abram builds an altar. In the next verse, Abram continues on in his travels. At another location, he builds another altar and calls out to God, but God doesn’t appear. Abram is met with silence. Abram doesn’t give up. He does not go home. He continues on his journey.

How similar is that to our own journey? There are seasons where we can sense God’s presence and feel Him speaking to us, then there’s seasons where we ask Him to show Himself to us and we’re met with silence.

We have a choice, to live with courage, to do the things that scare us, to obey God when sometimes it doesn’t make the most sense, and to do it when we are met with silence.

As we learn more about who God is, and what God desires for us, we begin to see how we have a choice in our daily lives to obey him, to live the way he wants us to. This is counter-intuitive to the way many of our friends, family, and co-workers choose to live. It means we’ll often be uncomfortable or misunderstood. However, Psalm 119:1-3 tells us, “Blessed are those whose way is blameless, who walk in the law of the Lord! Blessed are those who keep his testimonies, who seek him with their whole heart, who also do no wrong, but walk in his ways!”

If you look closer at Genesis 12:2, God tells Abram that he’s going to fulfill his promises to him, “ so that you will be a blessing.” Abram’s trust and obedience wouldn’t just bless his own life, it would bless those around him, and generations afterwards. If you continue reading his story, he doesn’t get it perfect. The man messes up time and time again, and in some instances, in really big ways. But God never leaves his side. God never “takes back” his promises. God continues to be faithful to Abram, and God fulfills his promises.

To sum it all up, have courage through obedience even:

1. After today’s workout, has your perspective on courage changed? Why, or why not?

2. Is there a time where you’ve had to choose to obey God even when it didn’t make sense? What happened?

4. Is there a situation right now where you need courage, which Oxford defines as “the ability to do something that frightens one,”? How does today’s lesson impact or change the way you might approach it?