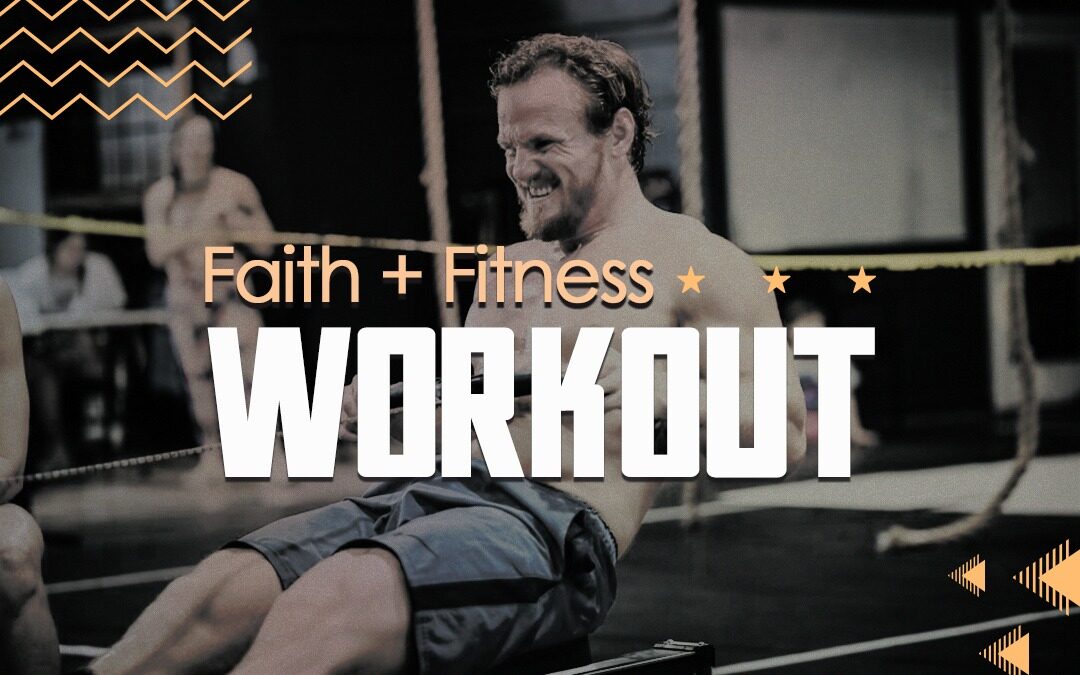 We’re talking about perseverance today. So yeah, this workout’s going to test that. But you don’t have to do it alone. You’re going to do this with a partner so you can suffer together and encourage one another. Whenever we face a trial, we have the choice in how we persevere, but we also need a partner who’s going to encourage us along the way – and vice versa. We need to be there for them, too.

Break up the work as needed between partners

“Jesus died to heal your back. Jesus died so we can be healed on this earth.” As she spoke, this girl looked up at me with these huge eyes full of conviction. She went on and confronted me on my lack of faith that God could heal my broken back.

I prayed for grace and responded, “Man girl, I appreciate your desire to see me healed, but that’s not why Jesus died. Jesus died to save me from my sins so that one day, I can be with God in heaven. So that you can be with him. Earth is not heaven, it’s not our final home. The reality is that we live in a broken world. My back is just one part of that hard reality. Can God heal me? Oh, absolutely. He has the power to heal and move mountains and raise the dead. Will he? That’s another question to be answered.”

It’s been three years since my accident. The road back has been one day at a time, and couldn’t be done on my own. There were good days, and there were really bad ones that to get through I needed the support of friends and family. I was sad. I was angry. Some days I needed a hug and to cry, and someone who loved me let me. Other days I was angry and wanted to wallow in self pity, but someone who loved me confronted me and wouldn’t let me stay there.

Some of the godliest people I know have prayed for healing over me. But nothing happened – yet everything did. Each time someone prayed, there was a strong word that God wanted to do more through my broken back. That it’s not really about it being broken, but about what he wants to do through it. As uncomfortable as that is, I have to trust and surrender to that.

The reality is that life will get hard, really hard, at times. A dear friend has just experienced another miscarriage after multiple preceding it. Another friend has lost their mom. Another lost their dad, and had to go to the funeral alone. We’ve seen some unfair dealings with athletes trying to make the games and their spots being taken away by governments or governing officials, or just plain having a bad day – something they’ve spent years training for, but it’s not going to happen.

Perseverance is defined as “continued effort to do or achieve something despite difficulties, failure, or opposition : the action or condition or an instance of persevering : STEADFASTNESS.” And Steadfastness means,  to be “firmly fixed in place : immovable; or firm in belief, determination, or adherence.”

This world is broken, and frustratingly, we won’t get perfect healing while we’re on earth. So how do we persevere?

We need a heavenly perspective.

Abraham went through a lot, like a lot a lot. At 75 years old, God promised him the son he’d always longed for, that he would be the Father of a great nation, just one catch – Abraham would first have to leave everything behind. God would call him away from his home and into the unknown, never telling Abraham HOW he was going to fulfill his promises, just that he would, and Ahraham would just have to trust.

Along the way, he fought wars, lost family members, had marital problems, his wife couldn’t get pregnant, he had big time doubts, you name it. He for sure didn’t get it perfect, yet, he kept his focus forward.

“But he gives more grace. Therefore it says, ‘God opposes the proud but gives grace to the humble.’”

God is all powerful and the only perfect being to ever exist. If anyone has a right to not deal with things or to play the “not fair” card, it’s God. But he doesn’t. He sees us and meets us where we are, if we would humbly go to him.

“‘If you love Me, keep My commandments. And I will pray the Father, and He will give you another Helper, that He may abide with you forever—the Spirit of truth, whom the world cannot receive, because it neither sees Him nor knows Him; but you know Him, for He dwells with you and will be in you. I will not leave you orphans; I will come to you.’”

We can’t do life on our own strength and knowledge. We need the Holy Spirit working in and through us to face what we need to face.

“Keep your life free from love of money, and be content with what you have, for he has said, ‘I will never leave you nor forsake you.’”

We don’t face this life alone. Whether it’s things happening to us that we have no control over, our own sin, things that scare us, etc., God is right there with us.

We need to be reading our Bibles.

“Every word of God proves true; he is a shield to those who take refuge in him.”

Because of all this, we can, and we need to, choose what’s right over what feels good in the moment.

The writer of these verses is a guy named the Apostle Paul. Paul was born between 5 BC and 5 AD, wrote many of the New Testament books we love, and was responsible for planting churches in the Middle East, Asia, and Europe.

Growing up and into his adult years, he had the best of both worlds. He was born a Jew but was also a Roman Citizen which afforded him special privileges and protection. Not only that, he was also highly educated by some of the best scholars of his time. He describes his background as “…of the tribe of Benjamin, a Hebrew of the Hebrews; as touching the law, a Pharisee…” He’d grow up and become an important person within Jewish religious circles, then would have a crazy conversion where he met Jesus on the road to persecute Christians. In explaining his past life, he shares, “… I persecuted this way unto the death, binding and delivering into prisons both men and women.”

After his conversion, Paul knew that he was called to preach the Gospel to the Gentiles, ie non-Jews. He’d face crazy opposition and challenges along the way – rom imprisonment, being chased out of towns, beaten, being shipwrecked three times, and facing personal challenges. He had plenty of distractions that could have robbed him of his joy and purpose, but didn’t. Instead, he persevered.

When Paul wrote to the Philippians from prison, “I press on toward the goal for the prize of the upward call of God in Christ Jesus. Let those of us who are mature think this way…”  Paul had choices, but he chose what was right and what God had called him to do, over pursuing the easier way out.

He could do this because he had a heavenly perspective, he had God’s grace, God’s help, God’s presence, and he knew God’s word.

Abraham and Paul both were impacted by the people they chose to surround themselves with. In Abraham’s case, he chose to listen to the wrong friends or family members and it led to pain or hiccups along his journey that have had ramifications that have lasted for literally thousands of years. Paul was wiser in who he chose to listen to and stayed the course.

The same grace to be imperfect that we want to be shown by our community, we also need to be willing to extend and show to others. A lie the enemy loves to throw at us is that we’re alone. But that’s not true. We’re never alone, God is always right there. And if we’re investing into the right community, that community will be right there when we cry out.