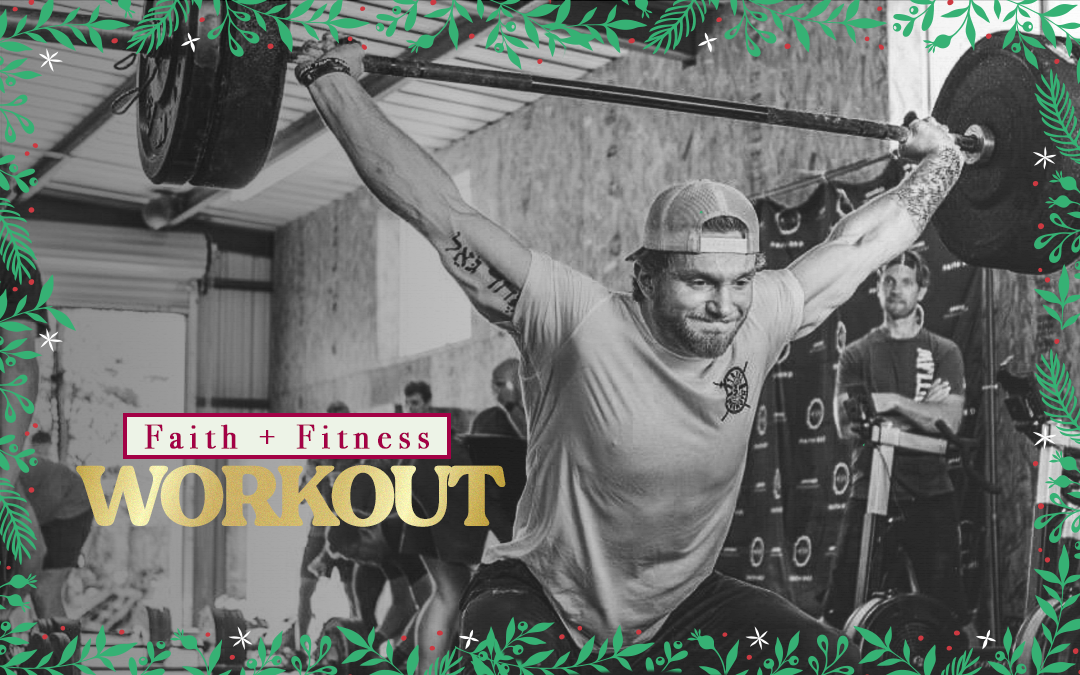 This is going to get spicy. You’ll wonder where your partner, i.e. your Savior, is at, and you will be counting down until they come back from their run so you can have a break from the cleans. Don’t cheat this, don’t give in to the temptation to take the cleans slow and easy.

Today we’re talking about how we have situations we hope will be resolved this side of Heaven. Some of them won’t be, but the great thing is that we have a Savior, and if we have a relationship with him, that means that even if our situation doesn’t get resolved now, one day it will end and it will be amazing because we’ll be in Heaven with Jesus. Hold on to that same hope. As hard as this workout is, it will end. So, embrace each rep and make the most of it.

While partner 1 runs, partner 2 does as many squat cleans as possible. Then switch when partner 1 completes the run.

5 In the days of Herod, king of Judea, there was a priest named Zechariah,[a] of the division of Abijah. And he had a wife from the daughters of Aaron, and her name was Elizabeth. 6 And they were both righteous before God, walking blamelessly in all the commandments and statutes of the Lord. 7 But they had no child, because Elizabeth was barren, and both were advanced in years.

8 Now while he was serving as priest before God when his division was on duty, 9 according to the custom of the priesthood, he was chosen by lot to enter the temple of the Lord and burn incense. 10 And the whole multitude of the people were praying outside at the hour of incense. 11 And there appeared to him an angel of the Lord standing on the right side of the altar of incense. 12 And Zechariah was troubled when he saw him, and fear fell upon him. 13 But the angel said to him, “Do not be afraid, Zechariah, for your prayer has been heard, and your wife Elizabeth will bear you a son, and you shall call his name John. 14 And you will have joy and gladness, and many will rejoice at his birth, 15 for he will be great before the Lord. And he must not drink wine or strong drink, and he will be filled with the Holy Spirit, even from his mother’s womb. 16 And he will turn many of the children of Israel to the Lord their God, 17 and he will go before him in the spirit and power of Elijah, to turn the hearts of the fathers to the children, and the disobedient to the wisdom of the just, to make ready for the Lord a people prepared.”

18 And Zechariah said to the angel, “How shall I know this? For I am an old man, and my wife is advanced in years.” 19 And the angel answered him, “I am Gabriel. I stand in the presence of God, and I was sent to speak to you and to bring you this good news. 20 And behold, you will be silent and unable to speak until the day that these things take place, because you did not believe my words, which will be fulfilled in their time.” 21 And the people were waiting for Zechariah, and they were wondering at his delay in the temple. 22 And when he came out, he was unable to speak to them, and they realized that he had seen a vision in the temple. And he kept making signs to them and remained mute. 23 And when his time of service was ended, he went to his home.

24 After these days his wife Elizabeth conceived, and for five months she kept herself hidden, saying, 25 “Thus the Lord has done for me in the days when he looked on me, to take away my reproach among people.”

What is one problem in your life right now that you would give anything for someone to come and take away? Is there pain in your life that you are begging someone to heal or fix? How would you feel if someone walked up to you and said, “I promise you, the end is coming. A Savior is going to save you from the brokenness you currently have in your life.” Now, how would you feel if you placed all your hope in that promise, and the Savior did not come that day. You wake up the next morning, the reminder of your problem, or pain, is weighing you down, and you think, “It’s okay. My Savior is coming. Hopefully today is the day.”

There are situations in our lives right now that we want fixed this side of Heaven; situations that we might do anything to have go away. The Jews in Jesus’ time felt the exact same way.

“The scepter will not depart from Judah,

nor the ruler’s staff from between his feet,

until he to whom it belongs shall come

and the obedience of the nations shall be his.”

Can you imagine growing up hearing a prophecy like that? Can you imagine being a slave in Babylon and your elders telling you about prophecies in the past where the obedience of the nations will belong to a ruler from the tribe of Judah? Since, as humans, there’s some commonalities in how we’re wired, we can assume there was an anticipation, eagerness, doubt, denial, and anger as they wondered when and how this ruler would save them from their desolate position.

But that’s not when their savior came. He wouldn’t come for almost 600 more years. They had no timeline to know when, how, and where this King, this Savior, this Messiah, would come.

The past week, we’ve started our dive into the Christmas story in our Faith Workout of the Day. We’ve read the beginnings of Luke 1 and gotten to know Elizabeth and her husband, Zechariah. We’ve also read the prophecies foretelling their son John, and how he would prepare people for Jesus one day.

This couple eagerly waited for their Savior, yes, but they were also in the midst of their own non-political battle that had nothing to do with who their physical king was or was not. They couldn’t have kids. Cultural differences have shifted, and this would be devastating for any couple, not just one 2,000 years ago. It’s a heartache couples who want to be parents know well today. Yet, back then, that was seen as one of the primary functions of women- to bear children, to ensure the family line would continue. Elizabeth’s very purpose and identity were threatened. To make things worse, the cultural belief was that if you had a physical deformity or medical condition like this, it’s because of unconfessed sin in your life. That’s why Luke, the author, included this in his writing, “After these days his wife Elizabeth conceived, and for five months she kept herself hidden, saying, “Thus the Lord has done for me in the days when he looked on me, to take away my reproach among people.’ (Luke 1:24-25)”

Throughout history, the Jewish people wondered, and I’m sure Elizabeth and Zechariah, what God was up to. I’m sure all of you have also wondered, “God, what in the world are you up to with this?”

The frustrating reality is that we don’t know. We don’t know what God is up to or why he has the timing he does. In our reading, Elizabeth and Zechariah eventually receive the desires of their heart- a child, a son. But not only that, he is the one prophesied about in the biblical book of Isaiah. He is the beginning of seeing the new season that God was about to usher in. He was the beginning glimpse of the promise God was about to fulfill.

Some of us won’t be able to see our situation resolved or fixed this side of Heaven, and that’s sometimes a really hard reality to face. However, the amazing thing is that our situation is not forever. God carries us through this life, through our heartache, through our pain, and through our despair until the day we’re with him. If we have a relationship with Jesus, we can thrive through the hard situation, knowing that it has a purpose, and that when that purpose is over, we will be made whole again, we will live in Paradise with him, with no more pain and suffering.

I’d encourage you to follow along with us this month for the Faith Workout by downloading our app. We’re going to continue to dive into the story of Jesus’s birth, but also take time to look at the prophecies we see fulfilled. We get the picture of everything that led up to this incredible moment, God son’s coming to earth to save us from the eternal consequences of our sin. Because Jesus came, these battles we face right now are not all there is for us. There’s so much more, but that’s only possible because of a loving Father who made a way.